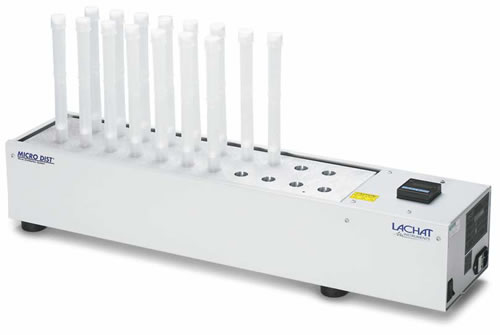 With the MICRO DIST system from Lachat Instruments, you can now distill up to 21 samples for cyanides, sulfide and ammonia in 30 minutes; and phenolics and tritium in 90 minutes.

USEPA-approved QuikChem® methods for the determination of several chemical species in environmental samples have been used for several years with the QuikChem Automated Ion Analyzer. Based on the techniques of flow injection analysis (FIA), these methods provide rapid, accurate and precise determinations. However, for some analytes samples must be taken through a complicated and time-consuming distillation process to remove the analyte from a potentially interfering matrix prior to automated analysis. As a result, the analyst is required to use a low-throughput, large-volume manual distillation method involving classical vaporization, condensation, and collection with expensive and fragile macro-scale glassware. This is incompatible with the productivity features of high-throughput automated analyzers.

In response, Lachat has developed the MICRO DIST system. This system distills 21 samples simultaneously in convenient, disposable or recyclable polypropylene tubes. The most popular applications are the distillation of cyanides and total recoverable phenolics. Both solid and liquid samples can be digested and distilled.

The MICRO DIST system quantitatively scales down the sample and reagent volumes such as those required by macro-distillations in USEPA methods 335.2 for cyanides, 420.1 for phenolics and Standard Methods (20th Ed.) method 4500-CN-N. MICRO DIST is a batch micro-distillation system which uses sample volumes of less than 10mL. The key to the system is a disposable, distillation tube assembly.

The sample is dispensed into a sample tube which is then attached to a collector tube containing a hydrophobic membrane. This assembly is then inserted into a heating block where the sample is boiled. The resulting vapor passes through the membrane, condenses, and collects above the membrane in a trapping solution specific to the analyte.

Upon completion of the distillations, the collector tube is snapped in half and the distillate is brought up to volume. With MICRO DIST, the sample is distilled under conditions that are significantly more reproducible than those of a macro-distillation procedure.